The Nyss are an offshoot of the Elven race. Elusive and rarely seen. Thousands of years ago these followers of Aeric, the chosen prophet of Nyssor (the Elven God of Winter) left the Elven nation of Ios and relocated to the Shard Spires mountains in the farthest reaches of northern Khador. 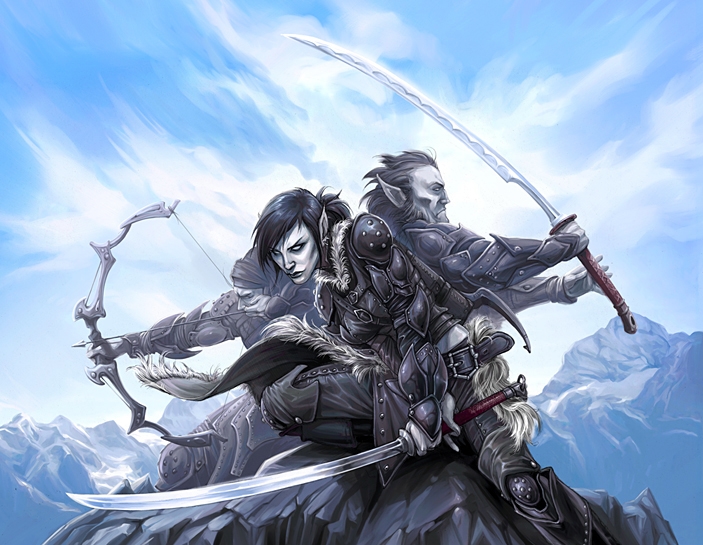 An insular people who fiercely defend their secrets and their territory. Interlopers were driven back into the frozen wilds or slain. Living in small tribes, or Shards, the Nyss were content with their lives.

All of that changed in the past few years as catastrophe struck. Unknown to most, the manipulative dragon Everblight has sunk his metaphorical talons into the Nyss. With millennia of time to perfect the application of his Blight, the dragon has corrupted the Nyss, forging them into them his own personal army. Control, manipulation and selective mutation are the least of Everblights changes to the Nyss. The Spawn came next.

The survivors were forced to flee from their homeland. Scattered and vulnerable the Nyss have sought sanctuary wherever they can. Mostly in the human realms of the Iron Kingdoms, but some Shards have remained in the frozen north. The braver ones in the foothills of the mountains or the Rimeshaw tundra or Scarsfell Forest,

Ascendant campaigns can view previous versions of their pages, see what has changed (and who did it), and even restore old versions. It's like having a rewind button for your campaign.

We've already been saving your edits, so if you upgrade now you will have instant access to your previous versions. Plus, you have our no risk refund guarantee , so there's nothing to lose.

I'm sorry, but we no longer support this web browser. Please upgrade your browser or install Chrome or Firefox to enjoy the full functionality of this site.